Training for Bomber Command was a lengthy process that normally exceeded the operational life of a given service man.

For Navigator Stoney Mitchell and Bomb Aimer Merv Bertie, training lasted 18 months and included 248 and 268 flying hours, respectively, from April 1943 through October 1944. In contrast, their operational life lasted just 4½ months, from November 1944 until they were shot down in mid-March 1945 after 95 hours of operational flying. The war had ended by the time they evaded from Denmark to Sweden, returned to Britain in mid-April 1945, and were ready to return to operational service, so Mitchell and Bertie flew no further ops.

Mitchell and Bertie’s replacement pilot Stan Slater had a lengthy war-time career with the RAF and then continued in peace-time RAF service until 1970. Slater enlisted in the RAF Volunteer Reserve in November 1940. By the time of his first operation on 5 March 1943, he had already accumulated nearly 500 hours of flying experience. In his subsequent operational life, Slater flew two tours of 25 and 31 ops, first with 100 Squadron for 136 operational hours and second with 576 Squadron for 178 operational hours. By the time he was shot down on 12 March 1945, Slater had accumulated 1237 hours and 40 minutes of flying through training, teaching, testing, and operations. During this time he was awarded the Distinguished Flying Cross twice (July 1943 and September 1944) and the Distinguished Service Order (November 1944). 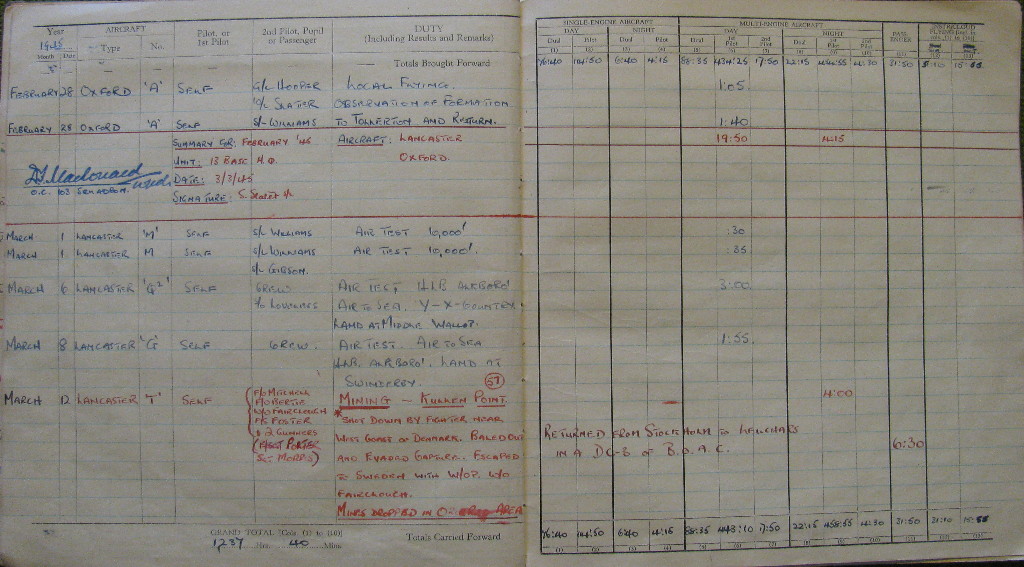